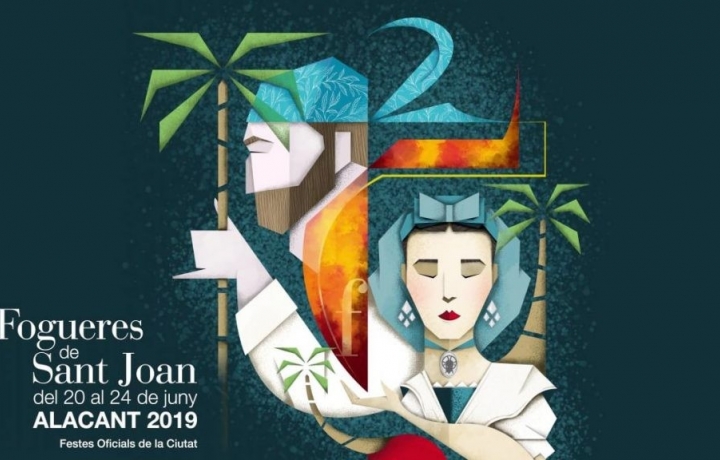 This week we will see the start of the main celebrations of the Night of San Juan and the Bonfires of Alicante. Also known as Les Fogueres de San Juan.

During these four days, 20th to 24th June, the city of Alicante celebrates officially with high intensity, with parties and fun for everyone.

The festivity of the night of San Juan is celebrated in many parts of Europe, although its main roots are in Spain, Portugal and the Nordic countries. Fires are lit and rituals are made that link to the arrival of the summer solstice.

However, there are two types of celebration dates, one astrological linking to the summer solstice (June 21-22) and the other Christian which is celebrated six months after the birth of Jesus Christ, on June 24th.

Whichever date is chosen to celebrate, whether linked to the summer solstice or the traditional Christian, both share similar traditions and customs in their celebrations. Bonfires are made in the streets, town or village squares and on the beaches, as part of the associated purifying fire ritual. It is seen as the magic of a special night and the celebration of light over darkness.

The bonfire, Fire, if possible, on the beach, is a purifying element that helps us burn everything that is bad and leave behind bad luck and negative energies. One of the oldest rituals is to jump over the fire nine times to ward off evil spirits and give protection throughout the year. Also, there is an ancestral myth that if you jump hand in hand with your partner, the union between you will be long lived and lasting.

Water (often the sea) is used as an element of health and fertility and it is said on San Juan night that the sea water is special. Those who are happy to take a dip can jump nine waves from behind and it is said they will get health and happiness for the whole year.

Earth, the herbs that grow on earth are said to have a magical element, on this special night the medicinal herbs that grow in fields such as thyme and rosemary are said to multiply their beneficial effects and their healing properties. It is therefore customary to leave at midnight from the celebrations and pick them and then hang them at your window to receive a blessing and make the most of their beneficial health powers.

Back to the celebrations in Alicante, the streets will begin to close on Thursday, 20th, and at night the official Planta will mark the starting point of the bonfires. The busiest days are likely to be Friday 21st and Saturday 22nd, being the weekend, with the party celebrations ending on Monday evening.

For a full list of the events in Alicante please visit: https://hogueras.com/calendario-de-hogueras/