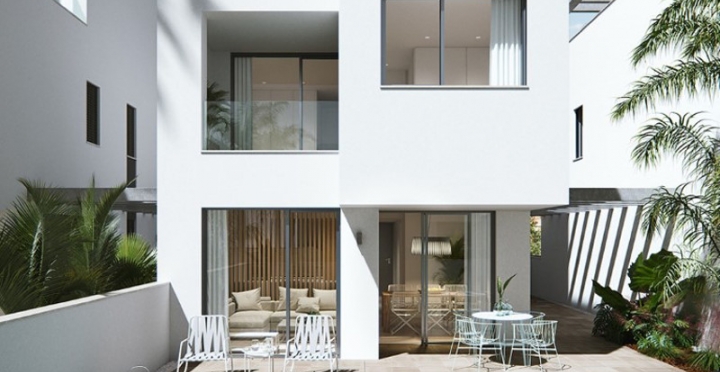 GS SPANISH PROPERTIES established since 1999 has the BIGGEST selection of new build property and is one of the few estate agencies which has ALL new developments. Don't be fooled by lower price tactics that some agents use, we are constantly updating our prices from the developers to ensure they reflect the most up to date price.

These luxury, second line, beachfront detached villas, with lovely sea views are located in Torre de la Horadada. These villas have three bedrooms and three bathrooms. They have a private pool, a landscaped garden and a car port.

The ground floor comprises of a fully equipped kitchen, a large dining and living area, one bedroom and one bathroom. The spacious living room has access to the front terrace and pool area. The first floor has two further bedrooms and there is access to the large balcony with a pergola and an outside kitchen with views to the sea.

Situated right on the beautiful coast of Torre de la Horadada here you will find the cleanest and best-equipped beaches of Spain. There are beach bars and a beautiful promenade that loops around the coast. Only 10 minutes away you will find the village of Pilar de la Horadada which is a very nice typical Spanish village. The large main street has a few large supermarkets, lots of shops, restaurants and bars and some lovely squares. The airports of Murcia-San Javier and Alicante are respectively 10 and 55 minutes away.

Golf Sun Spanish Properties is a successful family run real estate agency founded in 1999. Our professional team has a wealth of experience and we pride ourselves in being honest and trustworthy, creating a friendly no pressure environment for all our clients. All members of our team have lived on the Costa Blanca for more than 20 years so are very passionate about the area and knowledgeable on all aspects of living here. From the point of first contact we offer you a quality service taking care of you throughout the whole buying and aftersales process.

The recovery cycle, of the Spanish residential market is consolidating and will intensify throughout 2017. The evolution of the price of housing will continue with a gradual increase in average prices but with uneven progress in the different cities and coastal areas of Spain .

The new build properties for sale are reappearing in Spain

The silhouette of the cranes is again shaped in many cities in Spain, especially in many areas of the Mediterranean coast, although the data is still very far from the statistics recorded during the boom of the mid-2000s. Experts agree in pointing out it is positive for a sustained recovery of the sector.

During 2016, with data available up to October, the number of visas for construction of new housing in Spain increased to 53,131 units, up 33.23% over the same period in 2015, according to information provided by the Ministry of Promotion from the visas granted by the colleges of technical architects. This figure is already 6.91% higher than at the close of 2015 (49,695) and is the highest of the data for each year of the last five years.

The construction of new promotions is mainly explained by the improvement of credit promoters, although under much stricter criteria than those of previous years. The bank limits this financing formula to those companies that already have their final land and is a project financially backed by the future owners, if not totally, at least for the most part.

Do not hesitate to contact Golf Sun Spanish Properties if you are looking for new build properties in the area of Orihuela Costa, Costa Blanca or Costa Calida. In the catalogue of our website you can find all types of apartments, bungalows, houses, villas, luxury villas, land, fincas, etc ... both off plan and key ready.

Contact us today and we will make an appointment to start fulfilling your dream of living near the Mediterranean.